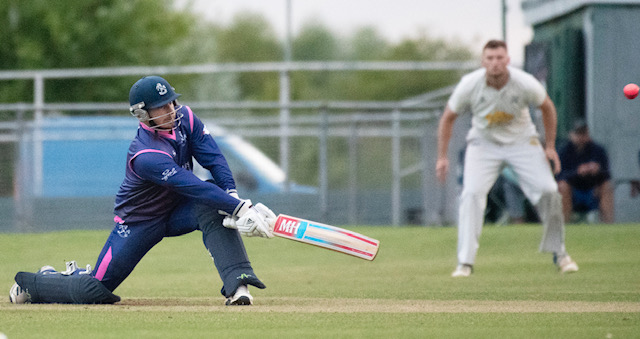 Chasing Rowant’s 161-5 in the T20 competition after the visitors had elected to bat, Horspath were soon in trouble at 35-4. But then Anupam Sanklecha and Tyrone Eyles got the home side back in the game with a brilliant stand of 57 for the fifth wicket.

Sanklecha smashed 38 off just 20 balls with three sixes, before he was bowled by leg-spinner Tristan Rossouw. But Eyles and Will Hawtin kept up the attack only for the former to be run out for 28 off 21 deliveries by Hayden Rossouw’s rocket throw from the cover boundary as he went for a second run to leave Horspath 119-6 with five overs left.

Without addition to the score, Hawtin fell for a valiant 16 from 11 balls when he was caught by George Reid off fast bowler Hayden Rossouw. But, in fading light and facing the South African-born fast bowler, Horspath kept up the chase before Jehan Mohammed was run out for 12 by Rowant captain Karl Penhale going for two in the 18th over to make it 140-8.

Horspath took 11 runs off the penultimate over with Alfie Turner hitting a six over long on into the nets, and the home side arrived at the last over – bowled by Hayden Rossouw – needing 10 to pull off a dramatic victory.

Turner and skipper Lloyd Belcher picked up three singles off the first four balls, before the fifth delivery went for four byes, leaving Horspath requiring two off the last ball to win. However, it resulted in just a further bye to the wicket-keeper, leaving Rowant winners by the narrowest of margins as the hosts finished on 160-8.

Leo Bethell (2-16) and Penhale (2-26), who had blown away Horspath’s top order, were joined by brothers Hayden (1-12) and Tristan Rossouw (1-41) as Rowant’s wicket-takers.
Earlier, opener Tom Condon had top-scored for Rowant with 50 off 55 balls with three fours and two sixes.

Mohammed made inroads into the the visitors’ batting with 2-22 off his four overs, before Belcher took 2-15 to keep Rowant in check. He dismissed Josh Smith for 14 courtesy of a brilliant low catch by Stephen Green at deep backward square leg, and the same combination accounted for Jamie Revill, but only after he had hit two consecutive sixes in a quickfire 17 off seven balls.

When Asad Rafiq ran out Condon, the visitors were 112-5, but then George Reid and Tristan Rossouw added an unbroken stand of 49 for the sixth wicket. Reid smashed 36 from 18 balls with five fours and a six as Rowant posted what would ultimately prove to be a winning total.

They now go on to face holders Banbury, who beat Oxford Downs by 50 runs, in the final at Wormsley on Saturday, September 18.