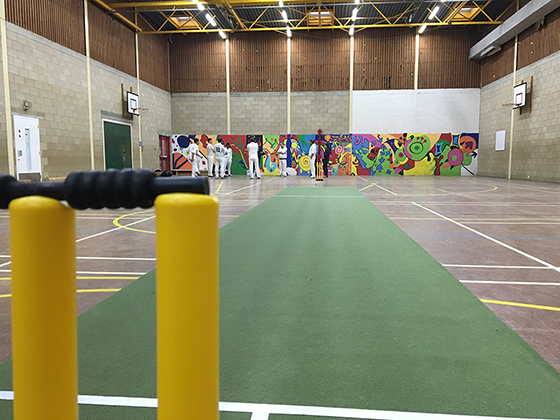 21/01/2022 by Nick Pinhol
Sunday saw the penultimate set of fixtures in Division 2 of the Oxford Indoor League.
The first game of the day saw Faringdon & District CC beat Eynsham CC.
Faringdon won the toss and elected to field.  Eynsham scored 89 for 5 off their 10 overs with Darius 27no and 2 wickets for R Brown.
In reply, Faringdon reached 93 for 1 in the 7th over with R Owen 27ret and R Brown 25ret.
The second match saw Bartlemas CC beat Deddington CC.
Bartlemas won the toss and elected to field.  Deddington scored 108 for 4 off their 10 overs with Matt Carpenter 28no; Elliott Barton 24 and Bis Neog 20 and 2 wickets for Taha.
In reply, Bartlemas reached 109 for 5 in the final over with Basit 25; Kavi 22 and Rohit 16no.  Rob Barton the pick of the bowler’s with 3 wickets.
The third match saw Stanton Harcourt CC beat Sunningwell CC.
Sunningwell won the toss and batted first scoring 73 all out in the 8th over with Dom Whinfrey 26 and 2 wickets for Ryan Wastie.
In reply, Stanton reached their target in the 6th over with the loss of no wickets Edwin Apps 28ret and Ryan Wastie 24no.
The final game of the day saw Charlbury CC maintain their 100% record against Ascott Under Wychwood CC.
Ascott won the toss and elected to field.  Charlbury scored 117 for 5 off their 10 overs with Matt Jenkinson 37no and Rob Collard 30.
In reply, Ascott reached 81 for 5 off their 10 overs with Sam Barnes 31 and Alex Vaughan 21no.
Next Sunday is the final week of the season with the first game at 12pm the key match to decide the league winners with Charlbury CC facing Stanton Harcourt CC.  Depending on results the second promotion place is still open to several clubs.
Good luck to all teams!
Oxfordshire Cricket Club Competitions (play-cricket.com)
The fixtures for Sunday 23rd January are: