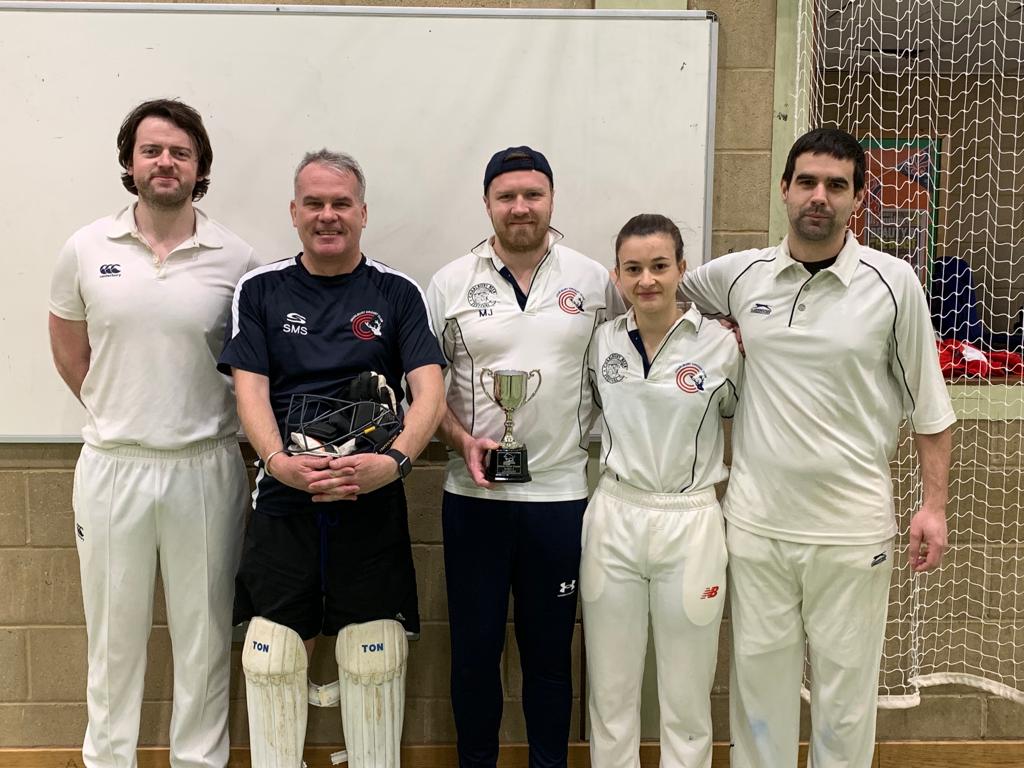 26/01/2022 by Nick Pinhol
Sunday saw the final set of fixtures in Division 2 of the Oxford Indoor League with the opening match between Charlbury CC and Stanton Harcourt CC deciding the inaugural Division 2 Champions.
The first game saw Charlbury CC beat Stanton Harcourt CC by 38 runs to become Champions.
Charlbury won the toss and elected to bat, setting an impressive 134 for 4 off their 10 overs with Simon Smith 26ret; David King 23 and Louis Broad 16.
In reply, Stanton lost a couple of early wickets and struggled to keep up with the required rate finishing on 96 for 5 off their 10 overs with Edwin Apps 32 and Geraint Apps 16.  Matt Jenkinson the pick of the bowlers with 2 wickets.
The second game of the day would decide whether the winners of this match or Stanton Harcourt would be promoted alongside Charlbury.  This game saw Ascott-Under-Wychwood CC beat Sunningwell CC by 6 wickets.
Ascott won the toss and elected to field.  Sunningwell were bowled out for 95 in the final over with Richard Smith 37 and Dan Garson 22.  Wickets for Josh Davies (2), Dan Taylor, Ro Moss and Josh Beasant.
In reply, Ascott reached 96-0 in the 8th over with Dan Taylor 28ret and Sam Barnes 25ret.
The third match saw Bartlemas CC beat Faringdon & District CC.
Faringdon won the toss and batted first scoring 103 for 3 off their 10 overs with R Brown 35no and W Oglesby 25ret with Masood picking up 2 wickets for Bartlemas.
In reply, Bartlemas reached their target of 104 for the loss of 4 wickets in the 9th over with Masood 29no; Kavi 21 and Dan Jacobs 19. Andrew Liddiard the pick of the bowlers for Faringdon with 2 wickets.
The final game of the day saw Eynsham CC beat Deddington CC.
Deddington won the toss and elected to field.  Eynsham scored 117 for 4 off their 10 overs with Jimmy Rossiter 30no; Andy Bain 27 and Chris Snelling 23.
In reply, Deddington were all out in the 9th over for 85 with Howard Lancaster 32 and wickets shared between Andy Bain, Chris Snelling, Darius Mistry and Jimmy Rossiter.
Congratulations to Matt Jenkinson and his Charlbury team for winning the inaugural Division 2 championship.
Ascott-Under-Wychwood CC with their final day success over Sunningwell and a better head to head result against Stanton Harcourt are promoted alongside Charlbury to Division 1 for Winter 22/23.  The final league table can be found below:
Oxfordshire Cricket Club Competitions (play-cricket.com)
Thank you to all teams for entering and playing great competitive cricket in good spirit with lots of youth players having opportunities.
Thanks also to our umpires and scorers, Chetan & Kashif, for all their support.
Division 1 starts on Sunday.
Back